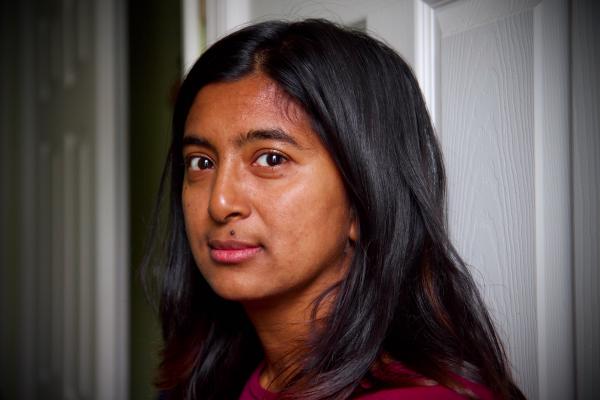 Luna is a writer and an organizer. She explores intersecting issues of social justice with a transnational lens, focusing on race, caste, class, and gender. She currently based in Kathmandu.

She writes across and between boundaries of personal and political, state and society, US and Nepal, poetry and prose. She has written about and been featured in print and broadcast media on the issues related to workers’ rights, migrant rights, language justice, gender, caste and racial justice. She is a former Ms. Foundation Public Voices fellow, and a recipient of 2021 Queens Art Fund grant for “Alien,” a hybrid immigrant narrative.

Luna is a co-founder and former executive director of Adhikaar, where she guided programs, research, policy advocacy, and partnerships, building visibility and power for the emerging Nepali-speaking immigrant community for more than a decade. Under her leadership, Adhikaar served and organized thousands of immigrant workers, who raised their voices to change laws, including the Temporary Protected Status (TPS) after the 2015 earthquake in Nepal, the NY State Domestic Workers Bill of Rights, and the International Convention on Domestic Workers. As a co-founder of the New York Healthy Nail Salons Coalition, she helped lead the way for the sweeping changes to improve working conditions in the nail salon industry. She also served on the advisory board of the National Healthy Nail and Beauty Salons Alliance.

Her groundbreaking work has been recognized by many community-based, national, and international organizations. In 2016, she received the Grinnell Prize that supports and inspires innovative social change makers throughout the world, and she was included in City of Women, an alternative New York City subway map recognizing women’s contributions.

This site uses cookies. By continuing to use this website, you agree to their use. I Accept